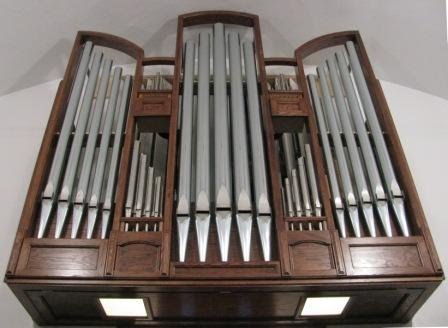 Facade in rear of Nave with 85 Principal Pipes (the swell-shutters, behind, control the expression of 609 additional pipes inside the organ chamber)
About the Pipe Organ
The Immanuel Lutheran Pipe Organ was completed in 2012. The congregation shares the instrument with the community and the region for education, recitals, lessons, and concerts.  In keeping with that commitment, the congregation has established a special fund for pipe organ maintenance, organist education, and lessons for youth, recitals and concerts.  Your gifts to this special fund are always welcomed.

The organ project was germinated in 2009 with a gift (from his family) of the personal pipe organ of the late Rev. A. O. Aadland, one of several he built.  The new Immanuel instrument was designed by his son, professional organ-builder Art Aadland (of Aadland Pipe Organ Company).  Art used a combination of new and historic components with both high-tech and classical design.  It is truly a work of love.  The Swell Division inside the chamber incorporates components from the classical tracker-action organ hand-built by Pastor Aadland (a former Pastor of Immanuel).  The seven ranks of historic pipes (427 pipes) on the Swell have been totally restored and re-voiced.  The main tracker-action chest was completely reconfigured, overhauled and modernized with solid-state electronic pull-downs and slider motors.  A new direct-electric treble extension chest was added to it, to expand the 49-note configuration to the standard 61-note keyboard.  A new organ chamber was built into the century-old steeple and opened up through the rear of the nave.

The Great and Pedal Divisions are entirely new with 12 direct-electric windchests and three huge ranks of pipes (totaling 267 pipes), an 85-pipe Principal rank (seen in the façade), an 85-pipe Salicional rank and a giant 97-pipe Gedecht/Bourdon set (both inside the chamber). The Great provides an impressive variety of stops. In addition to the 16’ Bourdon, the Pedal Division utilizes pipes from the Great Division.
Though technically a ten-rank organ, the pipe-works, with nearly 700 pipes, is comparable to a typical 14-rank organ.  The two-manual console features 27 stops.
​To the gifted organ, APOC added many other new components:  the two-manual console (with two 61-note keyboards and a 32-note pedal); 13 direct electric wind chests; the bellows; the beautiful oak façade that frames the highly polished exposed Principal pipes in the rear of the Nave; the swell-shutter system and 267 new pipes.  The organ incorporates the latest state-of-the-art technology (Peterson) in its control systems.

The Great Organ (first keyboard on the console) has 11 stops with 85 Principal pipes exposed and 150 pipes under expression (volume controlled by swell-shutters).  The Swell Organ (second keyboard) has 8 stops and 427 pipes, all under expression.  The “Pedal Organ”, mostly under expression, has 8 stops including Bourdon 16’, Quintaton 16’ and Resultant 32’.

What was accomplished is astonishing for Immanuel.  Fundraising was completed and the organ entirely paid for before installation!  No money was taken from Immanuel's budget. The project's total cost was under $150,000--for an instrument now valued at over $400,000.  In a year and a half, member contributions along with gifts from many non-members from our area and from throughout the USA, poured into the fund.  Over half of the funds, more than 250 financial gifts totaling about $80,000, came in from non-members from 26 states (three gifts came in from foreign countries). The work of local volunteers was especially noteworthy.  Eighty individuals (both members and non-members) gave over 6200 hours to the project.  While the project was underway, nine prayer teams regularly prayed for the organ and its workers. 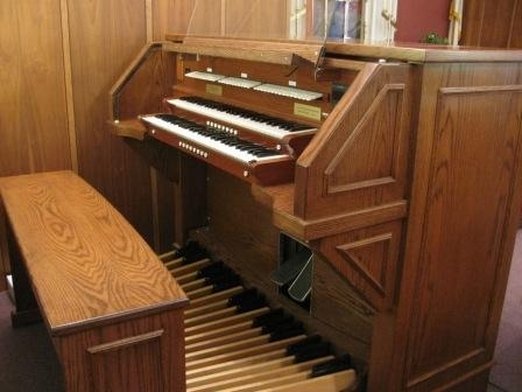 The Two-manual console (left side of chancel) with 32-note pedalboard and 27 stops, swell and crescendo pedals, 16 pistons and the Peterson control system
Specifications

Historical Note: The instrument described here is actually Immanuel’s second pipe organ. In the mid-1950s, Pastor Aadland hand-built an 8-rank pipe organ for Immanuel. His children helped build it. That organ had a single manual, a 58-note keyboard and 30-note pedal. The organ console along with three ranks of exposed wooden pipes were situated to the left of the chancel. The 16' bass (Viole) pipes were behind the pulpit, floor to ceiling.  A swell shutter was built into the North wall of the chancel.  Behind it, a chamber housing 5 ranks was located inside what is now the inner office. For a decade, beautiful pipe organ music accompanied worship at Immanuel, with Inga Aadland as organist.  That organ was removed in 1964 and sent to Old Westbrook Lutheran Church in Minnesota, where it was incorporated into their pipe organ that still plays today.

Our church building (Immanuel’s second building) is also historic, built in 1915-17. The congregation actually had begun to form in 1895 and was formalized in 1897 (the 3rd-oldest Lutheran church in Montana).  The continuous parabolic shape of the nave, with walls and high ceiling of original lath and plaster produces wonderful acoustics, both for the spoken word and music. The acoustics promotes good singing and provides for excellent projection of pipe organ sound.
​
Click here for complete booklet
ILC Pipe Organ Primer.pdf